Engenee is Confused - Trying to Understand the Setup

My Friend is a little bit confused at the moment May be I could not explain it properly or perhaps the message did not get across the way it should have. Either way here is another attempt.

First lets look at the picture of confusion. 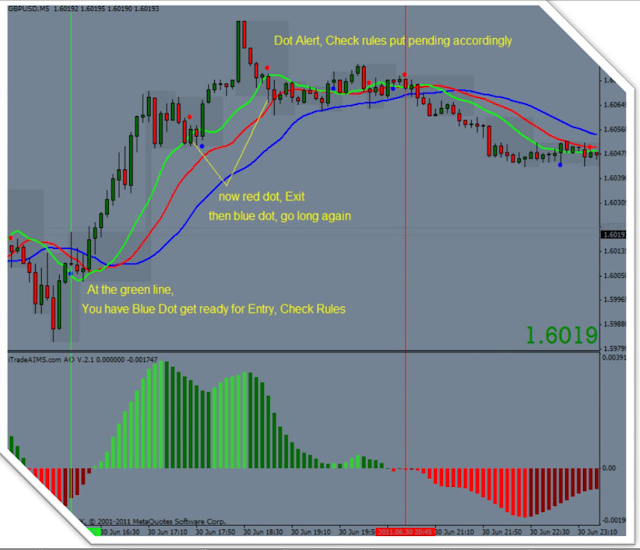 Engenee: I do apologise for bringing this on to the  blog from Emails but it was so important to me that I spent my Sunday on this.

Imran, look at the second setup example ( Posted Above) in the trading rules ebook (yes, I received it, but what exactly is it telling me).  The green line that you have drawn is on a blue dot with the alligator open in the other direction.  All you say on the picture is "You have Blue Dot get ready for Entry, Check Rules." OK, I checked the rules and it don't make sense.  The first bar to close above AIMS, I assume, is my pending order to buy; but at that point, the alligator isn't open.  Just telling me to Check Rules isn't enough.  I know what the rules say and according to the rules, I wouldn't buy at this point.  If your so-called rules pointed out the correct point to enter a pending order, we wouldn't be having this conversation.  You are drawing the green line at the blue dot.  I see the blue dot, but this trade doesn't conform to the very rules that you are telling me to follow.  That's what I am telling you.  I have had several trades with a blue dot that didn't work out.  In your example, when the alligator is open, most of the trade has passed.

First Confusion: Alligator Bars are Shifted to the Right

Second Confusion: Blue dot and Alligator open to Downside. Well if it was open to downside then you would ignore the setup and leave. But in the picture above at the time of blue dot it was not open to downside. It was about to go to sleep. That is because lines are shifted into future.

Confusion Three: The first bar to close above AIMS is NOT your pending. Your pending is above the AIMS levels while price is still inside Aims. AT the time of blue dot we did not have AIMS Levels so we wait  for an AIMS Level to Form. This is Ground Rule that we Always trade break of aims but we put pending before the Break not after the break. We do not put pending or market order when price has "broken aims levels". We put pending while price is still inside AIMS. So two bars to the right of blue dot is where we got our first clear upper aims level.  The candle that broke AIMS , is not point for setting pending, that is where you would have triggered long already. Not time for pending.

Frustration: In order to learn something or in fact to do anything at all in life, we must remain calm. Relaxed and open to "New Incoming Information". We must accept Chaos. Dont let frustration take the better of you. Remain in belief. Disbelief does not solve issues. Belief and Trust is what brings all the things into creations. We must trade with "An Attitude of Gratitude".

I try to tell the story of the above confusion using pictures. I hope this clears things up.

First I copy and past some of the things about Alligator.


We begin by looking at the chart with vertical lines. We can estimate where the lines would have been at the time of red dot / candle.

Note: If the pictures are not big enough just click on them and you'll see a bigger picture.

The Alligator Lines did not look like where the dot appeared.

The Lines did not look like this. In the chart below alligator lines are missing. Yes, because they are in to the right of the chart.

In the picture below the black arrows point to where the lines would have been based on their respective shift.

Now Lets cover the chart to the right.

Another Example: Specially Made for my Friend Engenee
Slide 1

Based on the above 3 charts, we only got alerted to the chart we did not see an entry. We saw potential opportunity but not a proper setup. Only 2 candles later. that is 10 minutes.  We saw what follow
The following picture now has teh vertical lines set to 2 candles after Blue Dot.
We now have upper AIMS level printed. Which gives us a point to put a pending
WE also have the Alligator lines sleeping. How? Scroll down and you'll find.