5 Waves of Order within CHAOS of the Market [Elliott Wave]

I have copied a few of my posts from our Live Trading Group.


AIMS Trading Signals and its Connection to Elliott Wave

*Hunt* is an extension or rather an extraction of the best bits of AIMS The Setup 1 and AIMS The Fruit Trading Strategy / Method...

It focuses on MTF (Multiple Time Frame)  Setup 1 and Most potent trend-following signal with a  counter wave entry method The apple Setup but MTF Apple. The Apple occurs at the peak of Wave 4 but its a leading indicator that takes you into the next wave 5. Its counter wave since its counter to the direction of the current wave but its in line with trend since the trade signal is in the direction of the previous wave 3.

*Simple Understanding of Counting Waves - What is Wave 3*
A Wave three is the most obvious strongest wave on your chart that consists of max 140 min 100 bars.

*when is a wave 3 confirmed*
everything  about the future is a potential and everything in the now is connected to the immediate past. So a wave 3 in the present is only a three provisionally and will be confirmed a 3 when we have the 4 in future.

*Wave 4*
a wave 4 is not a random market. It's not just any sideways market contrary to our previous thoughts on it few years ago. Wave 4 is a wave that is well inside the Structure. The market has periods of noise and periods of order.

Wave 4's happen within order.
(although if you go down a time frame or two within a current wave on the current time frame, you'll see "disorder". that is why we used to say, when you see noise, and no order, its probably a wave 4, but on a higher time frame. So when you see a wave 4 on current time frame everything on the lower time frame of that time frame will be under the umbrella of  this wave 4. Note: upto a certain extent. E.g. a wave 4 on D1 chart will still produce beautiful wave patterns on the m5 or m15 chart as long as there is enough volatility for the market you're looking at.

*When does a wave 4 become trade-able?*
A wave 4 is the immediate wave following Wave 3 in the opposite direction. it's a bit like going forward and backward. Suppose you walk 10 steps forward in a brisk and robust manner, you then stop and retrace your footsteps but this time you're blind folded , intoxicated and walking backwards in the dark. you wobble around while you try to retrace 3 -5 steps backward... then you stop. You get tired, take your blind fold off, get sober, get some energy, get some sleep and the next morning you blast off into the wave 5 ... Btw: this time you wre more likely to take between 6-8 steps. (Target Zone 1)

Email ThisBlogThis!Share to TwitterShare to FacebookShare to Pinterest
Labels: 10sec Elliott Wave, Higher Probability Setups, How to trade Wave 5, How to Use Elliott Wave?, Make Money in the Forex Markets, Setup 1

How to Tackle High Volatility in Forex Markets

Watch Video to Learn:  How to Tackle the high volatility periods we are seeing due to the Global Pandemic. Is it good or bad that mar... 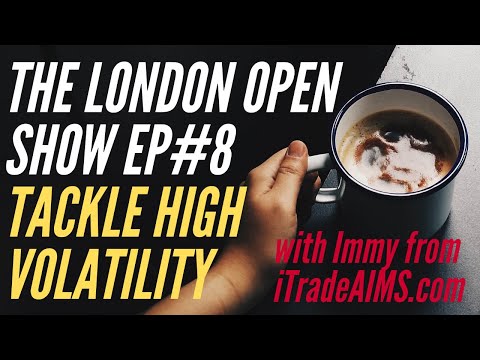