The First Question: Podcast Episode #1 [What pattern to trade?]

So the question is, why are people getting confused when it is very simple? That is because it's got two faces. It's like a coin.

So it's the same thing, but you can look at either side of it. So the face that we see is the common one, which everyone comes across.And the problem is that we have to switch our brain, the way we think about it. And only then we're able to see it. We need  to flip this coin and see the other side of it.

So, there are patterns in the market that we trade and we trade those patterns based on the belief that it will make us money. But what I've noticed is that everyone generalizes the idea. And they take the decision based on emotions, so they take emotional decisions, but fails to see the logic behind it.

Now, it's a great thing to have a pattern. But the ability for you to have the motivation to trade the pattern you have to understand the logic behind it as well. While the emotional reason for trading that pattern is to actually to get the emotional benefits from it. Which is "I want to trade this pattern because over the period of time it's gonna make me money."

The logical reason is that this. Pattern has a statistical advantage, which means that if you traded a hundred times then there's a higher probability that you will win more. i.e. The sum total of all your winning trades will be more than the total of all the losing trades. It does not mean that all 100 trades are gonna be winners.

What is the Win Rate of this method
It states that based on testing last 30 years of data and thousands of patterns. Identified. We have a certain advantage and to simplify it we have a 66% win rate where 33% is a loss rate. So in any 100 trades and if you trade 1%, you will lose 33% of your account.

Breakeven Tradess:
The rest of the 26% trades out of the 66% winners will be your breakeven trades. So, you will not lose money, but you won't make much money as well.


Losing Trades:
So overall You will win 66% of trades on average. The system will lose 30 to 35% of trades.

So if you compare the highest percentage of losing trades in that hundred trades batch with the lowest range then you will probably make 15 to 20% profit. But if you had the best month with higher win rates and lowest loss rate, let's say you had 30% of losing trades. That will account to 30 percent loss based on 1% risk per trade.

So, if you had 40%  winners. Every winner will be 2% winner. So overall you will have 80% account growth. Less the 30% losses. You will be left with a total of 50% account growth. Who would want to trade a system like this?. I know I will.

It's going to be something like this, so let's suppose you traded or backtested a thousand trades. Then you went on and checked batches of 100 trades. You will find that some of the 100 trades batches will have 40 to 35 percent winners and others will have 40 - 45 percent.

The point is that you need to try to understand these probabilities.  Understanding these simple probabilities fulfills the logical side of the argument.

If you don't try to understand this. And only go by the emotional side of trading then  what happens is that when you go through the thing that we call a losing streak, then it becomes a bigger problem.

An emotional problem. You have bad emotions involved into it and you have to then take a decision based on your emotions, that's where you need your logical side to kick in to say look. If you are emotional you would be survive the phase if you have an equally stronger logical side.

What is a Losing Streak?
Those of you who don't understand losing streak: It simply means that for every given set of events, let's say a hundred or a thousand events, there will always a probability of a series of consecutive winners or losers. And it's not that hard to find out. 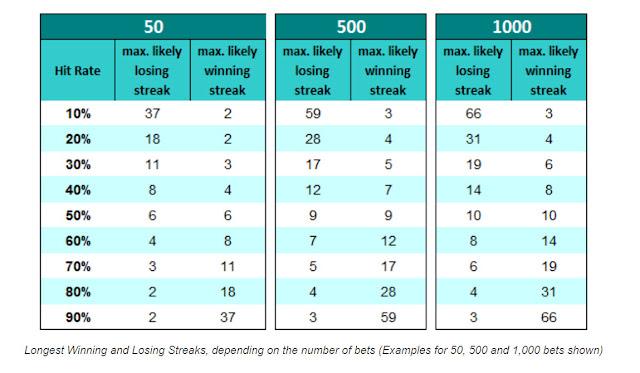 If you know the win rate of a system you can actually find out what is the probability of a five six seven or ten losing trades streak. Based on our analysis there is quite a high probability of having three winners or three three losers.

And  a lower probability of having five or six winners or losers in a row. As the number goes up the probability decreases.

So is it possible to have ten losers in a row? Yes, it is possible. However the probability of that is quite lower than twenty percent but that doesn't mean it won't happen. It can happen. But the opposite of it can also happen. The likelihood of 10 consecutive winners is actually higher.

Risk Management is Crucial:
And because we know that there is chance of this happening we must do everything in our powers to minimise the damage. Every system has a potential of doing some damage. The line that separates pros from amateurs is that the amteur trader does not prepare of this eventuality and ends up "dead in a ditch".

Whereas the professional has prepared for this possible outcome. And that is the definition of Risk Management.

Important to understand:
is that if it's a possibility then you have to have something in your trade plan to protect against it.

So that means that if you lose ten trades in a row and risk per trade was one percent the account will be down ten percent.

But imagine this, suppose you just had a  batch of  100 trades. Your account went up fifty percent and then the next batch you had ten losing trades now you're down to 40 percent, but if you look at the overall thing, you're still up by 40 percent, so it doesn't really hurt you much. You are emotionally padded.

It only hurts when you were already down. Unfortunately there is a higher probability of this happening for beginners. Because in the beginning you probably would lose discipline far easily.

That is because of your emotional state.  Because you are not used to trading much. The more emotional you are the more prone to mistakes you are so there are two things happening. One you're getting highly emotionally charged and that's leading to the 2nd which is losing discipline. And that leads to increased likelihood of losing streaks.

I wish you all have a great rest of the Sunday our Sunday is gone and we are ready for probably the final week of trading this year see you later.
- December 10, 2019